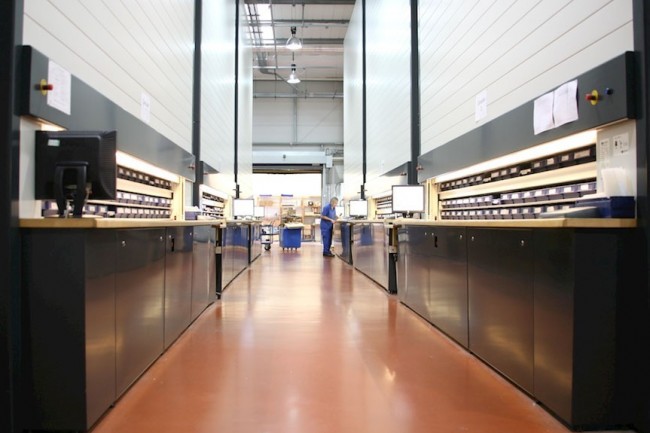 Carousel Facts - Did you know?

Our hIghly innovative, space-saving picking system delivers stored items to an access point with minimal effort. It is made up of rotating shelves set to heights which efficiently store and deliver items in only seconds saving time, energy and space.

The vertical carousel is operated by a single user which saves thousands of operational man hours.

HMHS offer a wide variety of carousel makes and models both new and used, each modified to suit your needs. The carousel is a robust piece of equipment, which can handle up to 500 kg uniformly distributed loads per shelf.

Our expert team of engineers modify each system to fit your specific requirements. Carousel installations are carried out with your company's work flow carefully analysed and considered to cause minimal interruption in production. Our engineers have been part of countless installation teams on projects large and small. We are equipped to carry out training for your new system and 24 hour support, an invaluable storage solution for your company.

A horizontal carousel is a system which rotates on an oval track.

Horizontal carousels can save up to 75% of floor space; increase productivity by 2/3, accuracy levels to 99.9%+ levels and travel up to 750 lines per hour/operator.

They consist of bin type storage in which every bin has shelves which are adjustable to .75". These shelves can be configured for a many standard and special applications.

An operator simply inputs a bin number, part number or cell location and the carousel will rotate via the shortest path. Multiple horizontal carousels integrated with pick to light technology and inventory management software (a pod of carousels) are used for order fulfilment.

Horizontal carousel systems generally outperform robotic systems for a fraction of the cost. On a simplistic level, horizontal carousels are also often used as "rotating shelving." With a simple "fetch" command, items are brought to the operator and otherwise wasted space is eliminated.

Request A Call Back